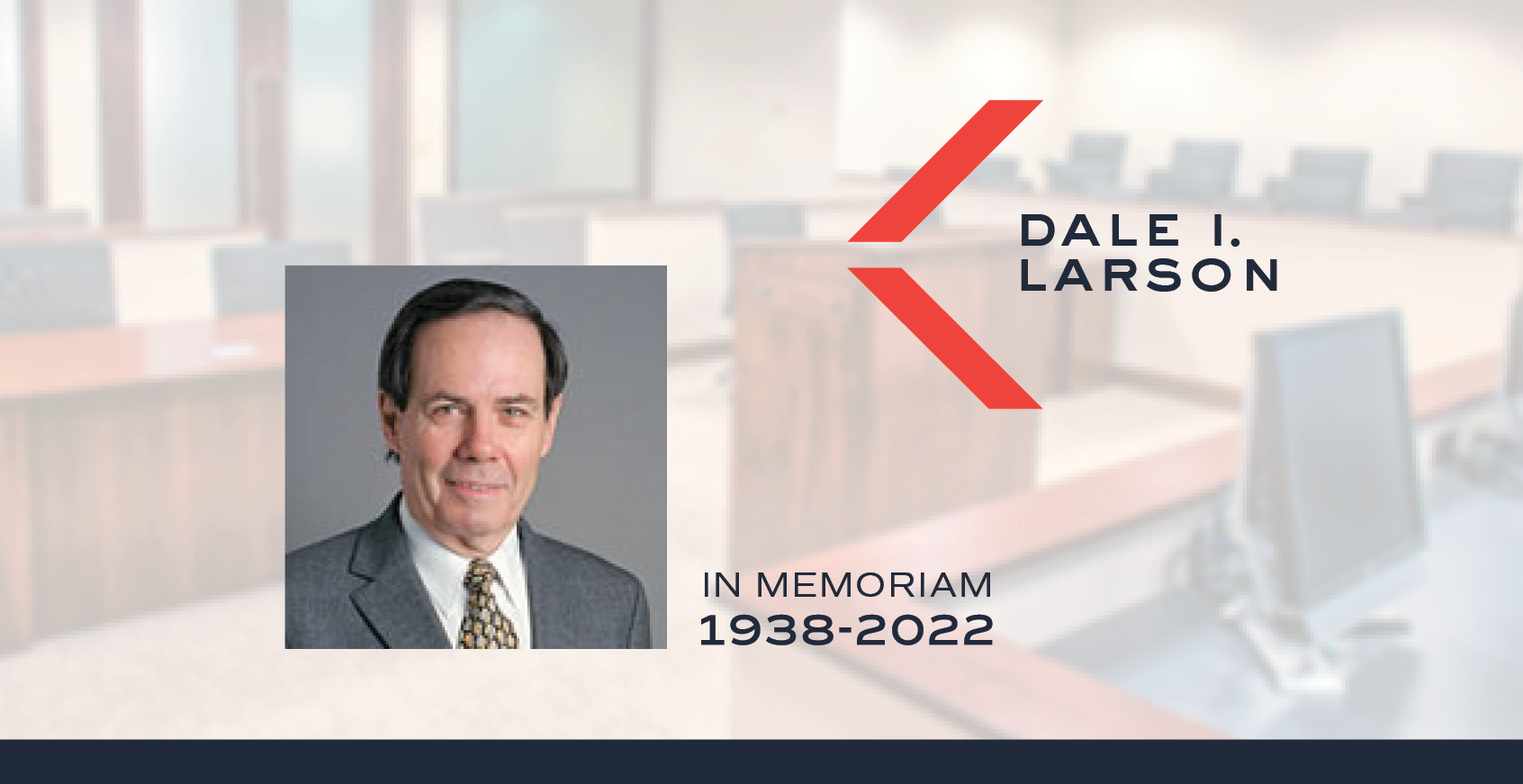 We are deeply saddened by the recent passing of Dale I. Larson, at the age of 84, due to natural causes. Dale’s contributions to the law firm that proudly bears his name were incalculable. We will forever be impacted by his stellar example of unwavering dedication to the firm’s clients and their causes.

Dale graduated from the University of Minnesota Law School in 1965 and started his legal career at the law firm of Robins, Davis & Lyons when it had about 30 lawyers in its Minneapolis and St. Paul offices. The law firm was renamed Robins, Zelle, Larson & Kaplan in 1980, after Dale was invited to join the firm’s executive committee. During the time Dale served on the firm’s executive committee, the law firm grew to more than 150 lawyers, expanding its offices and practice nationally. Dale helped the firm to earn the title “Kings of Catastrophe” in a 1985 Time Magazine article based on its involvement in several high-profile litigation cases, many of which Dale was directly involved in managing. Dale left Robins in 1988 to form the Zelle & Larson law firm, where he continued to represent clients involved in large and complex bodily injury, property damage, and business injury matters. In 1999, the Larson • King law firm was formed, carrying forward Dale’s values for aggressive representation of clients in litigation matters both nationally and internationally. Dale was Of Counsel to the firm until his retirement.

Uniquely, throughout his career, Dale never limited his representation to merely one “side” of litigation and, instead, frequently and routinely represented plaintiffs, defendants, policyholders, insurers and reinsurers. Dale’s experience as a lawyer was nearly unparalleled, with direct involvement in most of the high-profile natural, environmental and product catastrophes that impacted the legal system during his  nearly five decades of law practice. Included among the cases where he served as either the lead trial counsel or managing partner were: the collapse of Idaho’s Teton Dam in 1976; the fire at the MGM Grand Hotel in Las Vegas in 1980; and the deadly skywalk collapse at the Kansas City Hyatt Regency Hotel in 1981; as well as litigation involving asbestos bodily injury claims, DES bodily injury claims, Times Beach dioxin claims, Mount St. Helen’s eruption claims, and claims arising from the Norwest Bank Fire. In one of the more prominent moments of his early career, Dale served as lead plaintiffs’ counsel for women who sued the A. H. Robins Company arising from personal injury due to the defective Dalkon Shield IUD product, resulting in a monumental victory for his clients in 1984 in what was described at the time as the nation’s largest group settlement in a civil case and one of the most ground-breaking mass tort claims of its era.

Dale’s close colleague and one-time legal partner, Michael V. Ciresi, who worked with Dale on the Dalkon Shield IUD cases, said of Dale: “Dale was a unique and extraordinarily talented trial lawyer. We traveled many challenging roads together. What I always marveled at was his ability to find a pathway to resolution in the most difficult of situations. He was indefatigable in representing his clients.”

Dale was frequently called upon to represent Minnesota Mining & Manufacturing Company (“3M”) in various product liability and insurance coverage matters during his career. Among other things, Dale directly assisted 3M in the nationwide resolution of the silicone breast implant product liability claims that were asserted against it and was personally responsible for overseeing and directing the more than eight-year litigation effort to collect several hundreds of millions of dollars of product liability insurance coverage.  Former Deputy General Counsel and Vice President of 3M, Thomas Boardman, said of Dale: “He always had an unwavering dedication to his clients. He was a tireless advocate with a keen strategic mind and unique perspectives that had a significant positive impact on our defense efforts. He will be deeply missed by all of us who had the pleasure of working with and being represented by him.”

In addition to his consummate talent as a litigator, Dale was also a dedicated and giving mentor to those who had the opportunity to work closely with him. Keith Dotseth, one of Dale’s partners for over two decades, commented: “Dale consistently challenged all of us at Larson • King to be the best lawyers for our clients’ causes we could possibly become. He served as a hallmark for what it means for a lawyer to be an attentive and personally-dedicated advocate and urged us to never fail to dedicate our full and complete efforts to achieve the clients’ goals. He was a great friend, mentor and shining example of excellence. We will all miss him greatly and the firm will continue to strive to achieve his high standards as servants of the law.”

All of us at Larson • King extend our deepest condolences to Dale’s loving wife, Jan, his sons, Mark and Scott, and the rest of his family.